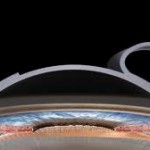 The first step of the LASIK procedure is to create a “flap”. The flap can be created by several different instruments including a microkeratome which is an instrument with a blade to cut a thin sheet of the cornea or a femtosecond laser which creates a flap through photodisruption and tissue separation. The creation of a flap does not contribute to the correction of refractive error. The LASIK flap simply serves as a lid under which the reshaping of the cornea takes place. Although the creation of a flap with a microkeratome (blade) is generally safe and for many years was the only way a LASIK flap was made, if a complication occurred during a LASIK procedure, it almost always was related to this first step of flap creation.

The IntraLase femtosecond laser was introduced as a safer way to create a flap several years ago. It offers unparalleled safety because it offers more precise thickness settings, is more customizable, is unaffected by the shape of the patients cornea, allows the surgeon to visualize flap creation and offers a “second chance feature” In addition the flap parameters can be adjusted to create a “manhole” configuration that causes the flap to fit snug decreasing the risk of flap slippage.

Raleigh LASIK patients may be confused by “cut-rate” LASIK centers offering blade-free or All-Laser Z-LASIK assuming this is the same as IntraLase. While Z-LASIK is indeed blade-free and does offer precise thickness settings like IntraLase, it offers none of the other safety features ie customization, lack of variability related to an individual patients starting cornea shape, the surgeon can not watch the flap being created and there is no second chance feature: basically you have only one chance to get it right.
Another important difference between the two types of flap-making lasers used in the greater Raleigh area is that a Z-LASIK flap is a single plane cut just like that created by a microkeratome blade whereas the IntraLase has a customizable side cut by which the surgeon can create a “lock-top”. This means the IntraLase flap is more secure against displacement from eye rubbing, squinting and squeezing during the first several hours after the procedure. The flap is also more secure from trauma in the months and years after the LASIK procedure.