Which is Better, One or Two? 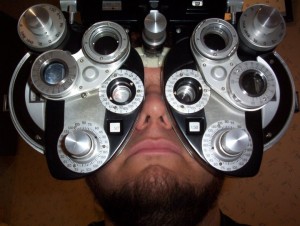 How good are you at determining which is better?

Today we use centuries old technology to determine what eyeglasses to prescribe eyeglasses and contact lenses for patients. A series of different powered lenses are held in front of a patient’s eye and the patient is asked to judge, subjectively, which lens makes their vision clearer.

“Which is better, one or two?”. The patient guides the doctor to the prescription that allows them to see best in medicine’s version of “hotter or colder”. Most of the time, the result is successful, but occasionally the result is a prescription that the patient can’t wear. In this scenario, glasses are simply remade. But this ancient technique of determining prescriptions is also used in standard and wavefront-optimized LASIK eye surgery.

The result of an incorrect prescription determination used in LASIK eye surgery is also a “remake”, but this remake is a second eye surgery. This aspect of pre-operative planning before LASIK eye surgery points out but a couple of advantages of wavefront-guided LASIK over conventional or wavefront-optimized LASIK. 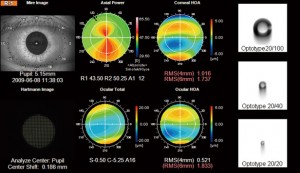 A wavefront analyzer is used to determine treatment in a wavefront-guided LASIK.

In wavefront-guided LASIK, a wavefront analyzer is used to determine the treatment. This takes away the subjective nature that can be affected by patient fatigue, fogged lenses, rash or hurried judgement or indecisiveness. How much better is wavefront analysis over conventionalmeans of determining prescriptions? Twenty five times more accurate. And the affect on “do-overs”? About four times less